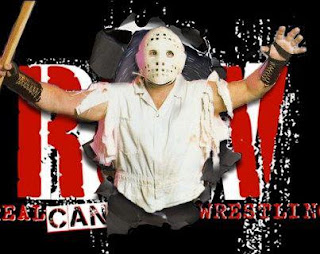 Legendary Stampede Wrestling Superstar, Jason The Terrible returns! Saturday, Oct 20th at RCW's Rise Of The Legends II witness the return of one of the most sadistic, bone chilling wrestlers to step into the squared circle. Jason The Terrible lives...and RCW may never be the same again.
Posted by Real Canadian Wrestling at 22:41 No comments:

Real Canadian Wrestling promised to deliver the announcement of a WWE Legend coming to Edmonton in November, and they have delivered with "Big Sexy" Kevin Nash! The former WWE Champion, and 5x WCW World Heavyweight Champion is confirmed for two events and one very special appearance! Nash is the longest reigning WWE Champion of the 90's Era, holding the belt for 358 days. He is considered one of the most controversial men in Wrestling history, but with that he is known for revolutionizing the industry alongside fellow NWO members, Scott Hall & "Hollywood" Hulk Hogan. Together, the three men kickstarted, what is known to wrestling fans as, the attitude era! Among holding both the WWE and WCW Championships, Nash has a never ending list of accomplishments under his belt. He is remembered as one of the most recognizable men in Sports Entertainment, and he is also remembered for being the first man to ever defeat Goldberg! Now, Kevin Nash comes to Real Canadian Wrestling in November to create history! Tickets on sale soon, get them while they last! These will be sell out events!

RCW Heavyweight Championship Match
Champion, "First Nation Sensation" Wavell Starr vs. WWE Legend, "Native American" Tatanka
At RCW Collision Course, RCW Heavyweight Champion, Wavell Starr, successfully defended his title against Jesse Youngblood. While it came with a little help from Red Thunder and a pair of brass knuckles, Wavell walked out with the Championship still around his waist! Following the match, the VP of Sports Entertainment, Daniel D. Kade, made the huge announcement that Wavell will be defending his Championship in the Main Event at RCW Rise Of The Legends II against WWE Legend, "Native American" TATANKA! Will "The First Nation Sensation" Wavell Starr be able to successfully defend his Championship against WWE Legend, "Native American" Tatanka on Oct. 20th in Edmonton, AB? Find out!!

ALSO, WWE Legend, "Big Daddy V" Viscera, will be in action LIVE!
Stampede Wrestling Legend, Jason "The Terrible" makes his return to the ring for the first time in years!

Posted by Real Canadian Wrestling at 22:32 No comments: